Every year, corporations use complicated schemes to shift U.S. earnings to subsidiaries in offshore tax havens—countries with minimal or no taxes—in order to reduce their state and federal income tax liability by billions of dollars.

Meanwhile, smaller, wholly-domestic U.S. businesses cannot game the system in the same way. The result is that large multinational businesses compete on an uneven playing field, avoiding taxes that their small competitors must pay. Innovation in the marketplace is replaced by innovation in the tax code.

The companies that abuse tax havens benefit from America’s markets, public infrastructure, educated workforce, security and rule of law—all supported in one way or another by tax dollars. When it comes to supporting the services we all depend on for a stable, secure and thriving community, ordinary taxpayers and domestic competitors end up picking up the tab for tax dodgers, either in the form of higher taxes, more debt or cuts to public spending.

While much attention is paid to the impact of tax haven abuse on federal revenue, offshore tax havens also reduce state revenue because state tax codes are often tethered to federally defined taxable income. Instead of reducing the problems of offshore tax dodging, recent changes to federal law increase the incentive for companies to stash their profits abroad. But even as Congress has missed opportunities to address tax haven abuse, there are changes states can make to reduce the impact of offshore tax dodging on state budgets.

Our report explores several options for states to address profit shifting. The main mechanism which states have created to address multi-jurisdictional profit shifting is known as “Combined Reporting.” In a Combined Reporting system, companies report their total domestic profits, including all their subsidiaries, to which the state applies a formula to calculate how much of that profit is attributable to business activities in a given state to determine taxable profits in that state. Twenty-seven states and the District of Columbia have enacted Combined Reporting systems, most recently Kentucky and New Jersey in 2018 (effective Jan. 1, 2019).

While combined reporting is a vital strategy for preventing domestic corporate tax avoidance, there are two ways the Combined Reporting system can be expanded to address offshore tax haven abuse.

• Require Worldwide Combined Reporting, Also Known as “Complete Reporting.” Already an option for many states operating with a Combined Reporting system, this is the simplest and most comprehensive way to eliminate profit shifting to dodge taxes. A worldwide report requires a company to report their total, global profits, and the portion of that overall business done in a given jurisdiction. If a state makes up 2 percent of a company’s global business, then 2 percent of their taxable profit would be subject to the state’s tax rate. Worldwide Combined Reporting is the most comprehensive and effective tool to address tax haven abuse that states have.

• Extend Domestic Formula to Include Known Tax Havens. Also known as the Tax Haven List approach, this reform mandates that companies include their U.S. profits held in offshore tax havens when calculating taxes. In many states, companies calculate their tax liability based on their income held in subsidiaries incorporated within the water’s edge (within the United States). By declaring a statutory list of tax havens, states can tax corporate profits held in offshore tax havens.

Montana and Oregon passed laws that curb offshore tax haven abuse and collected some millions of dollars in tax revenue that otherwise would be lost, though Oregon has since repealed this rule. Montana continues to treat a proportionate share of the income that corporations book to known tax havens as domestic income for state tax purposes.

Using the Tax Haven List approach allows Montana to collect more than $8 million per year in corporate taxes that would have otherwise gone uncollected.

After Oregon passed similar reforms in 2013, which raised $28.4 million in additional revenue in 2014, legislators repealed the rule in 2018 under pressure from corporate lobbying. Now, Oregon is considering the more comprehensive approach with new legislation to require Worldwide Reporting to improve their ability to apply taxes fairly to all types of businesses.

Local businesses tend not to hide their profits with complex international tax schemes, but they do compete against other businesses who exploit those loopholes. Enacting Worldwide Combined Reporting would even the playing field in addition to generating critical revenue. 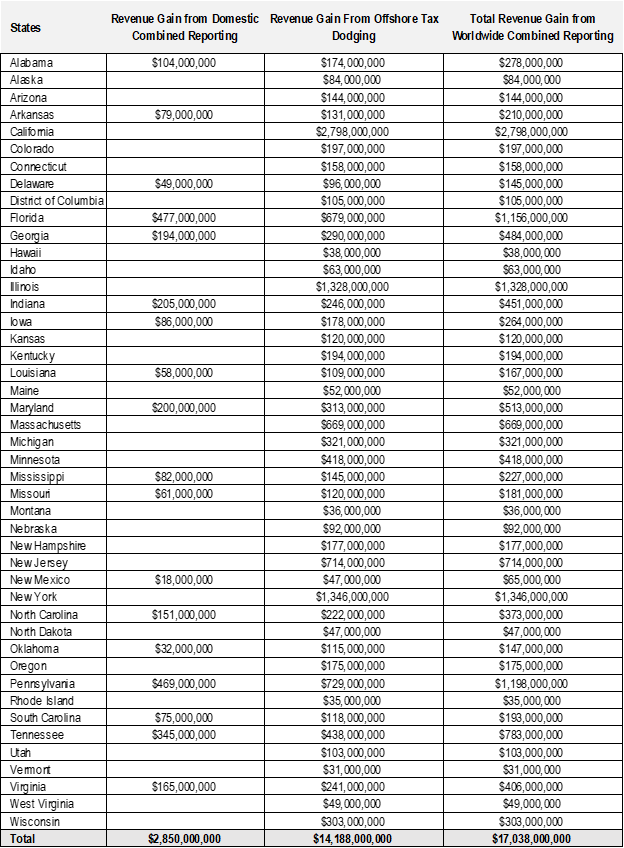